The following profile of Oumarou “Sam Dol” is an excerpt from the blog imissdennys.wordpress.com

The first time I met Sam Dol was almost a year ago at the Musée de la Femme in Dano with my family in his cluttered art/music room. He explained to us in a mix of French and English how the broken fence leaning against

the outside wall of his building was his representation of the struggle of woman, then proceeded to bang on a wooden xylophone (called a balaphone) for us until our guide Malick interrupted him with applause and led us out of the room. I remember thinking he was pretty crazy.

Turns out I was right, but luckily he’s only crazy in the way any good artist is supposed to be crazy.

Sam Dol will show you a table covered with a hundred small rocks and pebbles he found around town and go on about how isn’t it amazing that these rocks were in these exact shapes when he picked them up off the ground?

Look, this triangular one kind of resembles a heart! There are pieces of styrofoam covered in sharpie scribbles tied up in the trees around his display room, and his paintings are strewn across the floors and stuck to the walls crookedly and carelessly with packaging tape. He’s disorganized and eccentric and passionate. I realize now that if Malick hadn’t interrupted his balaphone jamming when we first met him, Sam Dol would likely still be playing for us now, looking up at our faces and reactions in between swift strikes to the large, wooden keys. He’ll play forever, so the best thing to do is to jump in with him on an extra balaphone or drum or the Bjork-inspired collection of percussive scrap metal on a table in the middle of the room.

The thesis of his art can be broadly and simply understood as “Peace in Africa”. The recent civil war in Côte d’Ivore, the Boko Haram terrorists in Nigeria, ebola, and violence against 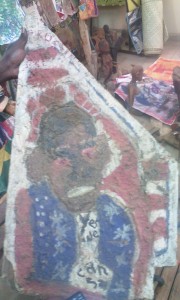 women are frequent topics of Sam Dol’s work. There’s an anti-genitalia mutilation tree outside of his display room that splits into three or four large branches about two meters up with a large, painted clay pot covering another broken branch, protecting it. He describes the extending branches that aren’t broken as arms being held back. 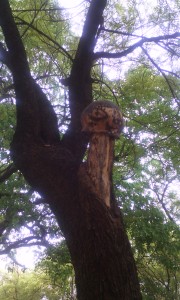 Recently, a lot of his paintings are about the historic transition of power that took place here in the Faso last October. For Christmas, my parents received a Sam Dol original depicting the National Assembly building in flames in Ouaga, the proud work of fed up citizens after a vote to change the presidential term limit was announced. Upon receiving it, they told me through tears of gratitude that I was their favorite son. Sam Dol’s second favorite country after Burkina has got to be America. He painted a portrait of Obama with red eyes on a large, thick piece of cardboard with the “Yes We Can” slogan on his tie (which is pretty scary coming from an Obama with laser vision) and his 10-year old son, little Barack Traore, is named for the same robotic president.

Sam Dol’s artist name is also confusingly patriotic: he told us that the “Sam” stands for Uncle Sam and the “Dol” short for dollar. Something tells me that if an artist in the states named him or herself after our country’s weird, skinny uncle and its base unit of legal tender they wouldn’t encounter a whole lot of respect from the art community.  Or maybe ironically they would?  I don’t know a whole lot about art.

Sam Dol’s work stands in stark contrast against the unimaginative, cookie-cut, overtly sexist stuff aimed at foreigners that you can find in most other places.  Take the Artisan Village in Ouaga, for example. This is where most whities go to find souvenirs to display their impressive levels of cultured-ness in first world living rooms and kitchens across France and America.

Go to the Artisan Village if you want an iron sculpture of a woman carrying a bowl of water on her head with a baby tied to her back, or a tie-dyed tapestry of many women carrying bowls of water on their heads with babies tied to their backs.

The “art” sold there serves only to remind mission group and tourist types years later of their 10 to 14 day stay in Burkina, the magical place in West Africa where tall, beautiful women carry bowls of water on their heads and babies on their backs.

Sam Dol’s art isn’t strictly for monetary gain (despite his name’s origin) and it certainly doesn’t consider a foreign demographic’s misinformed perception of Africa. He produces because he needs to: because something restless within him shifts and twists, begging to be let out into the world, and his only mode for releasing it is with a couple cans of paint, a handful of sharpies, and some styrofoam. He’s a cool dude.